Kit bashing and all that goes with it... 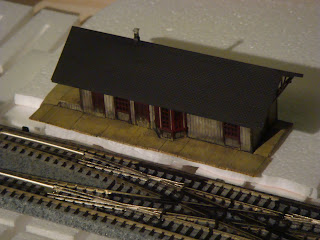 For the second story in my film, a lot of action takes place in Rock Hill, the site where the Baltimore Gun Club built their mighty Columbiad. My job is to make it look like after ten years, it's quite the tourist attraction. There will be tents and popcorn vendors, palmists and tea leave readers, and a number of permanent buildings; an ice house, the main train station and a few more. My plan is to make/buy a number of Victorian era HO scale models and use them as backgrounds.

Now, I'm not sure if you've ever seen one of those building kits, but they look really fake. Plastic. As an experiment, I bought a train station in N scale for my home layout. I removed the plastic brisk base and created a more appropriate wooden one using this unique balsa wood that had been scored or etched by a laser to look like 2x4s.

Then I went to town and weathered the whole enchilada and added some mud on the ground and at the base of the building. I think it looks rather... used.

Terry gave me some awesome pointers, so the next ones I do are going to look even better. Plus, they're twice as big, which will make it a little easier.
Posted by spajadigit at 9:01 PM 2 comments: Links to this post

Someone else made a neat black and white short film.


I love the look, the visuals are stunning and it's poignantly sweet. Very inspiring
Posted by spajadigit at 9:01 PM 2 comments: Links to this post