The Glowerston Coat of Arms 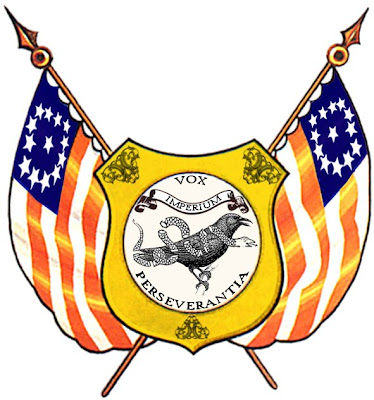 In case you were wondering, the Latin reads: Power, Control, Perseverance. Glowerston was a war profiteer, hence the crow and the cut up snake. (Which, incidently, is the design Ben Franklin drew for his infamous Unite or Die cartoon!)
Posted by spajadigit at 10:01 AM 2 comments: Links to this post

The evolution of a matte painting... 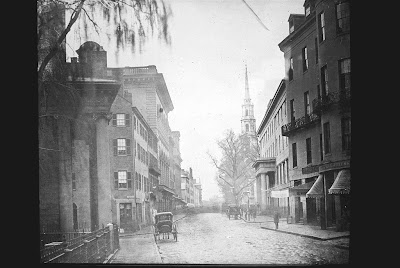 This was a picture of Boston I found online. It's perfect for one of the establishing shots for my film, but there's a couple of problems. First, there's still people in it. Well, people AND a horse and carriage. In order for my shot to work I need to remove them. Here's what that looks like... 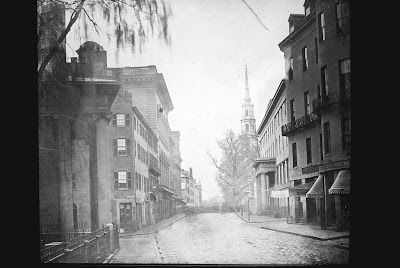 Second, because it's going to be an alternative version of Boston from the 1870's, I will be making the buildings taller by at least one floor. It's the Fourth of July, so I'll also be adding those red, white and blue bunting to some of the windows and adding some Victorian signage to the shop there on the right.

Eventually, I will be compositing people and digital vehicles on top of this to give it some life.

Fixing pictures like this is tricky, no doubt about it.
Posted by spajadigit at 9:01 AM 5 comments: Links to this post

Some rough costume designs for Fanny... 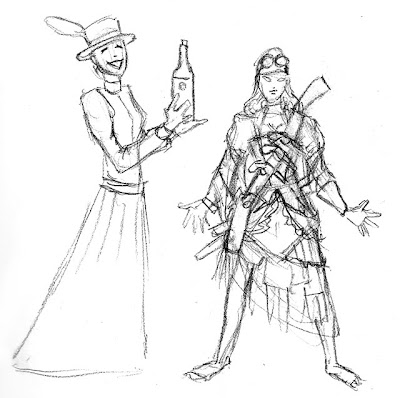 These are some designs I drew based on a Victorian costume I found (I love the hat with the feather!) and sort of a neo Victorian pirate I've been doodling for the last year or two. The first picture is Fanny in the prologue and the second is Fanny in the third chapter. Quite a difference, but she ended up living in China with Wu for fifteen years until Glowerston found her and had Wu killed. So, she's a badass.
Posted by spajadigit at 9:31 PM 1 comment: Links to this post

Gauge design for Huzzah the Moon! 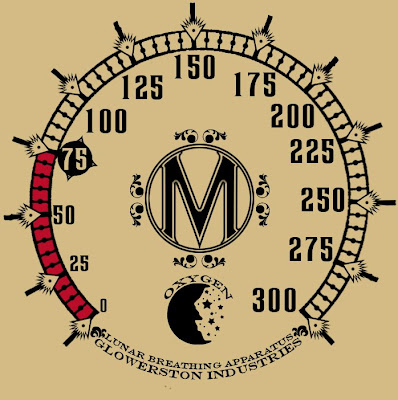 So I will be printing this out and putting it in the gauges for the backpacks. I've bought a bunch of old water and air pressure gauges from the 1900's on Ebay, which I have to take apart to clean anyway, and this inserts quite nicely.

I love steampunk!
Posted by spajadigit at 9:01 PM No comments: Links to this post

A lot of rewriting, a lot of time spent with my son.

Haha. So, I think I finally have all the plot points nailed down.

Posted by spajadigit at 9:31 PM 4 comments: Links to this post 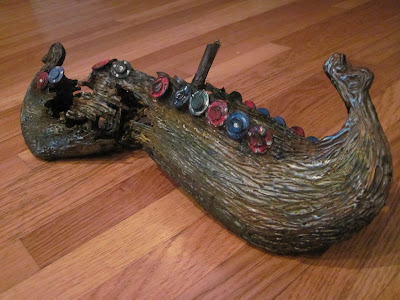 Here is the third ship. I based it roughly on a model ship I found online. One of the great things about cardboard and hot glue is how easy it is to change; I realized my initial attempt was too wide and the rear of the boat was too thick. So, I just took out the scissors and chopped it up, re hot glued it and then put more paint on it.
Posted by spajadigit at 9:01 PM 4 comments: Links to this post

The one sentence description: part 2.

I've been thinking about this one a lot over the last several days.

One of the comments I got early on was that Mulvey was too passive. Once I heard that, several other people agreed and so I started thinking about this journey. What happens after revenge is gained? What does revenge cost? And how can I make this story interesting with a complete character arc while still maintaining a four chapter film where each chapter can stand on it's own?

My friend Karen was instrumental in helping me get over that hurdle.

So here we go.

The story is about a relative innocent who tries to follow his dreams, loses everything to conspiracy, vows revenge and only after achieving it discovers he was following the wrong ones.

I retain the right to change this again!
Posted by spajadigit at 9:00 PM 2 comments: Links to this post

The first two ships from the graveyard... 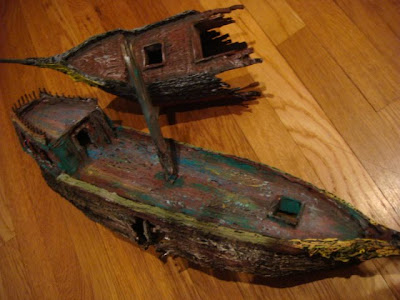 Well, here they are. In the graveyard of lost ships, there will be thirteen of these things from different ages of nautical expeditions. The more complete one is almost two feet long! I'm building these models out of cardboard and hot glue, plus some more aging with wet moss and of course bits of sail.

It will all be set in a miniature cliff eight feet wide, eight feet long and about nine feet tall. I still have to figure out how to shoot it- Make a harness cable rig with a motor on it that will descend the camera at a constant speed, build some kind of boom setup... There will be tests.

I'm hoping I can come up with some cool lighting with these things backlit- I'm afraid they won't really hold up to a clear closeup, but since I'll be transferring them to sepia toned old film, I should be able to get away with a lot!