I just bought the costume for young Fanny 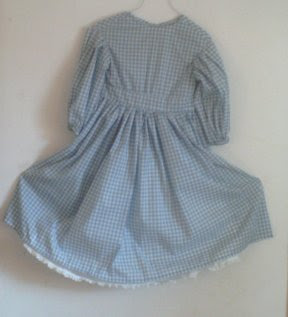 So I think it's going to look awesome; it's a pre civil war era play dress, which is perfect for the scene. Alexia just has to wear black stockings to make this thing work. I also purchased an era specific primer, some clay marbles and something called a Battledore- sort of a hand held reference for children with letters, numbers and even has the "now I lay me down to sleep" prayer on it.

The scene has worked out even cooler than I was hoping and I only need two dialogue cards... Maybe only one if I can get my two young actors to sell the storyline. The story boards do a great job getting this action across, and the finale is quite funny. 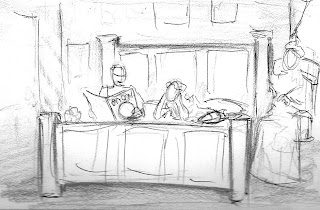 This is a flashback to when Fanny and Mulvey were children together. Toys and school books are scattered across the bed they are playing on under the watchful eye of a nanny. 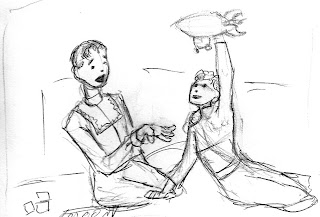 Mulvey is trying to tell Fanny of his singular interest and dream- to get to the moon when he grows up. Fanny picks up a toy blimp while he is explaining all this and notices what she's holding. 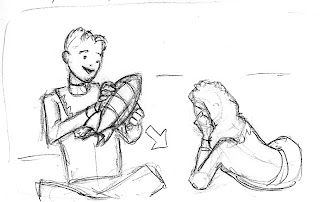 He asks for it, she gives it to him and he pulls off the gondola... Indicating that it is now a rocket ship, which he enthusiastically blasts off and flies around. 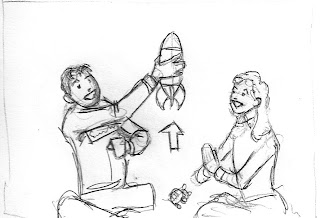 Fanny is now totally captivated, clapping her hands and laughing. She finally tells him that she wants to go too, when Mulvey shatters the mood by laughing at her, and saying "Don't be silly. Science is for boys!" 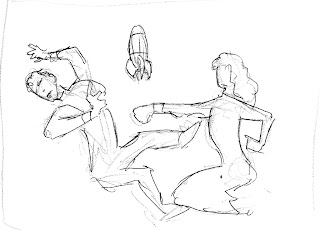 At which point she promptly decks him.
Posted by spajadigit at 9:01 PM 2 comments: Links to this post

Here's a brief glimpse into the Steampunk Bizarre


I shot this video while I was at the show. I apologize that it's the same music as the other one, but for some reason the new music I put on, while not copywritten per se, was rejected and the soundtrack muted.

Oh well. This is really cool.
Posted by spajadigit at 9:01 PM No comments: Links to this post


Here it is. Remember, we made this entire thing in less than eight days (five of which I was working so I couldn't spend that much time on it!) All in all, I think it is pretty impressive, and I hope that you also get a laugh or two while watching!
Posted by spajadigit at 9:01 PM 1 comment: Links to this post

Final poster... All aboard! 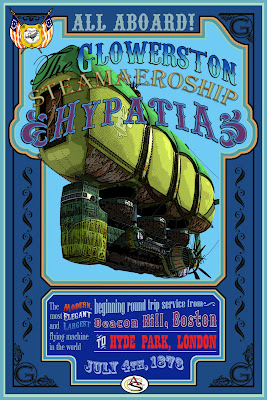 I thought I would post the final version of my advertising poster. I switched out the M's for G's (Mark convinced me that Glowerston would never allow Mulvey to admit authorship publicly...) and everyone liked the leafy things on the sides. At the show, I printed out 20 4x6 on really nice card stock and I actually sold five! (Six, if you count the guy who just walked away with one, but that's not really a sale...) One visitor actually bought the framed version I made to advertise them. (I made a matte out of leather and it looked pretty neat!)

If you want one, drop me a line and I'll try and get it to you!
Posted by spajadigit at 9:01 PM No comments: Links to this post

All the hats arrived.

Most of the costumes are here and Kat Steele has already started getting hers to fit properly. She looks awesome, as does Mark. But yeah. The hats make the man (or woman) as they say and in our case, they look smashing.
Posted by spajadigit at 9:01 PM No comments: Links to this post

The props done. The poster's done. And finally, in a little over eight days I pulled thirty greenscreen keys and rendered out two hires renders of the Hypatia and the loading dock that looked fantastic.

The dvd went out this morning, winging its way to Connecticut. Final length? Six minutes.

Six minutes of cheese, that had my wife laughing out loud at my hammy acting. It was great.

So now I feel empty inside.

But not really.
*whew*
I'm done.
Posted by spajadigit at 9:01 PM 2 comments: Links to this post